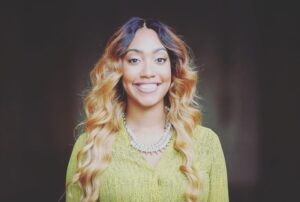 Eva Evans is a Comedian and Host specializing in Stand-Up Comedy, and a wealth of other talents within her genre. After graduating from St. John’s University with a degree in TV & Film, she thought a career behind the scenes at a major Television network would be her start up the corporate ladder of success. But within a few years, she realized Corporate America was not for her. That realization led her to decide she needed to pursue what truly made her happy, and turn her pain into laughter.

Writing her first joke while sitting in her cubicle, she quickly began pinning more, and after a few months, participated in her first Open Mic at Broadway Comedy Club in NYC. Shortly thereafter, she found herself resigning from her day job and began to chase her dream of becoming a Full-Time Comedian.

Since graduating from the Manhattan School of Comedy at Gotham Comedy Club (NYC) in 2016, Evans has performed in various festivals and shows, including the Harlem Comedy Festival (NYC) in 2018; she was the only Black woman to reach the finals and essentially became the Winner of the 2017 Manhattan Comedy Festival (NYC). She’s been featured on Sway in the Morning at Caroline’s and The Wendy Williams Show. At the request of Senator Jessie Williams, Evans performed at the 2018 Women’s Empowerment Awards. She was a semi-finalist in the American Black Film Festival Comedy Wings (2021), featured on the Netflix is a Joke The Festival (2022) and the Laughing Skull Festival (2022) She also has been a featured act for fellow comics, TruTVHost Damien Lemon, Toronto-based Comedian Trixx, Lil’ Rel and Mason Pryor, son of the late Richard Pryor.

Evans will make her Television debut this fall on the new Reality TV Series, “Hustle in Brooklyn,” and as quoted by BET, will “explore the social and professional lives of some of Brooklyn’s most sought after and influential personalities.” Eva has been described as “the true definition of a hustler.” (Shadow and Act, August 2018)

Evans currently resides in Brooklyn, NY (originally from Jamaica and Englewood, NJ, respectively), where she’s been a resident for fifteen years. She was the only woman of a group of comedians with security access to perform for inmates at Rikers Island (2018-2019). She continues to perform at notable clubs throughout the US. She keeps her followers and new fans abreast of her moves and moments on Instagram at @evaevanscomedy.

“If laughter is the best medicine, then I’m handing out prescriptions.” — Eva Evans

“Laughter is wine for the soul – laughter soft, or loud and deep, tinged through with seriousness – the hilarious declaration made by man that life is worth living.”
― Seán O’Casey